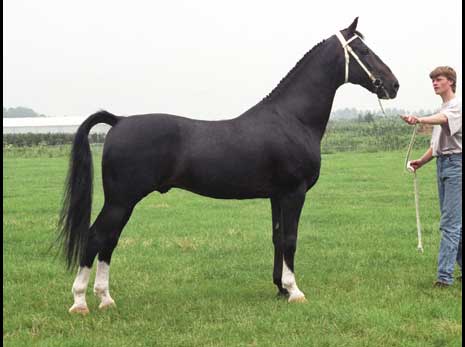 Performance Ermelo 1983
Attentive, friendly, obedient stallion Good humor, honest, happy, tenses quickly. He had already been harnessed at the start of the test. He has a very sensitive mouth and must be maneuvered with a light hand. In the beginning of the test he was on the forehand too much, especially after getting tense. This improved considerably later on. His movements are sometimes fairly short but he also shows large movement. His movement got more scope as the test went on. Moderate tail carriage. The powerful walk should have more scope. The trot has scope and power with good use of the hindquarter. He is very maneuverable in the driving test, he bends well. He is good in front of the sled but the walk should have more scope. He shows much front before the show cart and has very good posture. His movement is very good. He is an elegant harness horse. He is more than sufficiently willing to work and finds it light. He enjoys his work. He has very much talent for harness. He was in good condition upon arrival. He only ate oats and hay, no pellets. He was able to drink as much as he wanted. He muscled up during the test. Stall behavior was calm.
On 4/06 he had problems with his mouth.

Offspring 1985 (foals)
The development of the foals that were shown left something to be desired. A few samples had sufficient development, other were barely sufficient or not enough. As a result of the straight shoulder and moderate connections, the picked foals were barely sufficient in type. The type of the selected foals was better with a good wither/shoulder formation. The head is long and has little expression. The neck is well formed but sometimes is deep from the chest. The neck is set on sufficiently well and goes into a nice, long poll and is nice where the head is attached. Where the wither/shoulder formation left something to be desired for the picked foals, it was better for the selected foals with sufficient development and slope. The back/loin formation is sufficient, even though the foals in the picked group could have been stronger in the loins. The croup is pretty much short and round. The foreleg - especially the knee - could be stronger developed. The hindleg is sometimes correct, but sometimes straight, something that shows in movement. Especially the picked foals often had a poor gaskin in front and a limited hock that is limited in use. The picked foals had insufficient scope in the walk, it was stiff with little power from the hindquarter; the selected foals were better.
A number of foals lack real tuig type manners in the trot. The hindleg does not carry sufficiently and this is why the foals can"t climb in the forehand. The use of the foreleg strongly varies, sometimes flat, sometimes with strong knee action. The scope is generally present in the trot.
The stallion did service good tuig type mares.
The veterinary remarks pertain to the often-straight stance of the hindleg, combined with a poor gaskin and poor muscling around the knee joint, which sometimes gave the impression that the hock and knee joints did not function properly.
In spite of the remarks made in the report the stallion committee decided to give the offspring a chance because of the performance abilities of the stallion.
Shown: 24 foals out of 87 breedings.

Approval term 1989
For the first time an approval term of three years (starting in 1990). The stallion is extended this privilege because of his conformation heritability. Even though it was determined in his foal report that he was not consistent, it was found that as the foals grew he was able to deliver products of very high quality. The performance of his offspring in harness is faithfully awaited.

Keur 1993
This champion of the harness stallions now has 45 offspring that are competing in harness. The stallion does appear to pass on his performance ability. With 131 points he is in fifth place on the index. Even though the first foal crop left a somewhat varied impression, Waterman did also produce conformation champions. The first that comes to mind is the multiple UTV champion Erina. Out of the present 99 studbook mares, 50 have earned the ster predicate, which is a high score. Fourteen mares are keur. Waterman can also reproduce himself in the male line. His sons Droomwals, Heineke and Interessant currently serve the breeding program while Imondro, his first grandson has already presented himself.