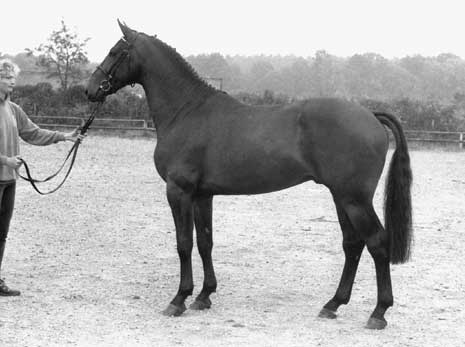 Click the breeder name to get more info about this breeder.

Performance 1989 (tied for 7th)
Rather disrespectful, friendly, obedient, honest, good humor. He was green at the start of the test. He really liked to look around during the first weeks of the test. This disappeared after he was warmed up. He paid more attention as the test went on. He has a sufficient walk. The trot is also sufficient but does not impress. The canter is more than sufficient to good. He canters easily. He shows a lot of scope in jumping; he is careful and jumps up nicely. He gives his rider a good feeling. He should show more suppleness in free jumping. He has a nice, big canter in cross-country. He varies a little on the jump. He is very willing to work and the work is easy for him. He has more than sufficient talent for dressage and very much talent for jumping. He was in good condition upon arrival and remained that way. He eats normally. He is calm in his stall.
From the time he arrived his right hock was filled, an old injury per veterinary excuse. It did not bother him during the test.

Preferent predicate (2014)
Born in 1986, this Wellington son out of a Farnese daughter was bred by VDL Stud of Bears & Bouke Lodewijks of Franeker. In his performance test, Emilion earned a 9 for jumping under saddle, a talent which came to fruition under Ulrich Kirchhoff. The combination's achievements include winning the World Cup competition in Millstreet, Ireland, and placing second in the Grand Prix at Donaueschingen, fourth in the Grand Prix at Valkenswaard, and fifth in the Grand Prix at London. In addition, Emilion attracts high-quality mares: 45% of those bred to him have earned the ster predicate and more than 50% of these qualified for higher predicates. His sons Empire and Sarantos are both approved for KWPN breeding. Emilion is also the grandsire of the KWPN-approved stallions Zavall VDL and Freeman VDL, the latter of whom is a former stallion selection champion. Renowned Grand Prix offspring by Emilion include Tomboy, Seldana, Emmerton, Glasgow, and Valdato. Emilion's breeding value is 144 with 95% reliability. With a score of 100, he is average in passing on his conformation and clearly above average in passing on jumping talent, with a score of 108.
The Stallion Selection Committee has decided to award Emilion the Preferent predicate (2014).

Offspring 1991 (foals)
This stallion showed barely sufficient to sufficiently developed foals that are of riding type but sometimes short-legged. The head is well formed and shows good expression. When stood up the neck - which has good length - looks a bit deep, this is not noticeable during movement. The wither is well developed and long. The shoulder is sufficiently long and has sufficient slope. The back is strongly muscled and transitions into nice loins that are wide, muscled and well connected. The croup has good form and length. The foreleg is correct. The hindleg is rather often long while the hock should be a little more developed. The quality of the legs is good but they could have a bit more substance. The walk is supple and sufficiently big. The foals show a lot of elasticity, balance and tact in the trot and good use of the hindleg, which in turn produces the desired lift in the front. The foals appear to do transitions with ease. One of the veterinary remarks was that among the otherwise well cared for feet, several were toed out. One foal that was evaluated at home was a bit less in type than the above-described collection but showed the same in the trot.

In short: the collection of riding type foals varied in regards to development. The trot shows a lot of balance, tact, rise in the front and elasticity.