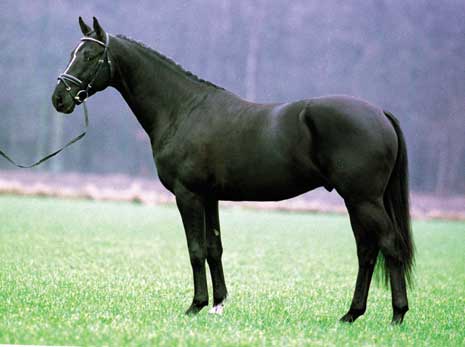 Conformation Description
OO Seven is a more than sufficiently developed stallion in sufficient rectangular model and that has a lot of appeal. The neck has good length but is a bit deep from the chest. The poll has good shape. He is a little hollow in the back. The croup is long and well muscled; the hamstring should be a bit longer. The base exudes a lot of quality.

Pedigree Information
Genetic dressage ace with an appealing type and light-footed movement with much impulsion, self carriage and balance. Unique combination of bloodlines thanks to first rate sires such as Rubinstein I and Doruto, the worlds best producer of dressage horses.

Performance
OO Seven is an honest, reliable stallion. He is very willing to work and works very well. The walk is sufficiently big and has a great deal of power and tact. OO Seven has adequate scope at the trot and is light on his feet with good balance and tact. He bends the hindleg well, but he should lower the croup during transitions. The canter has good scope and a great deal of balance. It is easy to close him at the canter. His foreleg remains a little flat while moving. OO Seven has a great deal of talent for dressage and gives his rider a very good feeling.
OO Seven has a sufficient take-off. He bascules sufficiently and has adequate technique of the foreleg. He seems careful enough and shows more than adequate scope. OO Seven has a moderate to sufficient amount of talent and gives his rider a moderate feeling.
Handling behavior is normal.
The stallion sucks air. During the second half of the test the stallion became sensitive in his back. Through directed exercise and medication his complaints completely disappeared.

One foal inspected at home fit in with the rest of the picture in regards to development and type and deviates positively in movement. A second foal was sick to the degree that inspection was not warranted.

The quality of the mares varied.


At the 2015 KWPN Stallion Show in 's-Hertogenbosch, OO Seven was awarded the keur predicate. Wim Ernes, Chairman of the Stallion Selection Committee, commented on the new keur stallion: “The Rubinstein I son is out of the ster prestatie mare Gelbria, a Doruto x Amor daughter and full-sister to Imke Schellekens-Bartels' Grand Prix horse Barbria. OO Seven was born on the property of Isabel van Gisbergen-Sponselee of Hooge Mierde. As a four- and five-year-old, the stallion won reserve champion in the Pavo Cup competition under Imke Schellekens-Bartels. As a five-year-old, OO Seven competed in the World Championships for Young Dressage Horses in Verden. Imke Schellekens subsequently competed the stallion in the international Small Tour. After he was sold to a buyer from Australia, David Shoobridge began competing the stallion there in the Grand Prix. His sport breeding value is 140 with 93% reliability.” OO Seven has one approved son: Zuidenwind. One hundred eighty-four OO Seven offspring have been registered in the studbook. Of these, 40% have earned the ster predicate. Due to the distance between Australia and the Netherlands, OO Seven was not present at his award ceremony. However, he was represented by his breeder Isabel van Gisbergen-Sponselee and his son Up Seven S.T.V. (ds.Jazz), who competes in the Intermediaire I under Florentine Rootveld.