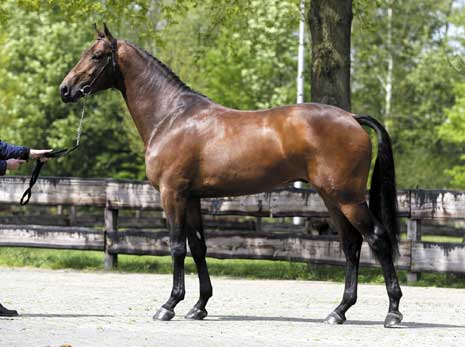 Click the breeder name to get more info about this breeder.

Type 2002 (March 14 - May 22, 2002)
Sir Sinclair is a well developed, riding type stallion that stands in good rectangular model. The wither and shoulder should be more generously developed. The back is hollow. The croup is round and should be a little longer. The hindleg is long. The stallion has weak pasterns.

Pedigree information
With an excellent performance test and performance record (Z1-level dressage) Krishna, who has produced 5 colts, is a good foundation for the son of Lord Sinclair. At a young age Lord Sinclair (Lanciano x Raueck) did well at his own performance test receiving 147.16 points test for dressage, thereby beating the others in his age group by a mile. The dam"s sire, Flemmingh Keur, can pass on type and movement as no other. Through Le Mexico and Amor we come to the prestatie mare Najada prest (s Lucius xx) who also produced the KWPN stallion Zandman.
Grandmother Christa produced La Croix (Z1-dressage, s Voltaire) and great grandmother Vitha is the grandmother of the Z1-dressage horses Marlou (s Burggraaf) and Nelson (s Burggraaf), a full sister to the KWPN stallion Zandman.

Performance
Sir Sinclair is an honest, reliable stallion. He is very willing to work and he works well. The walk is pure and big. In the beginning the walk ranged from long to short. This gait improved a great deal as the test went on. Sir Sinclair shows much scope at the trot. He trots with suppleness and much leg technique. Sir Sinclair trots with a much balance and he closes well. He has good scope at the canter. He canters with appealing use of the foreleg and shows much suppleness and balance. Sir Sinclair has much to very much talent for dressage and gives his rider a very good feeling.
Sir Sinclair has a moderate take-off in jumping. He jumps with sufficient leg technique but he should use the body better. He seems careful and shows moderate to sufficient scope. Sir Sinclair has moderate talent for jumping and gives his rider a moderate feeling.
Stall and handling behavior are normal.
Veterinary report:
Nothing out of the ordinary.

Sir Sinclair showed a uniform group of sufficiently developed foals with refinement, that are riding type and stand in sufficient to more than sufficient rectangular model.

Sir Sinclair was awarded the KEUR-predicate in 2015:

Eighty-nine Sir Sinclair offspring are registered in the studbook. Of these, 52% are ster, 3% provisional keur, 13% keur, and 18% elite.

Sir Sinclair passes on sufficient rectangular-shaped conformation. The heads have a light head-neck connection. The wither is moderately developed. The back and loin are rather weak. The croup is clearly sloped. The pastern angle is weak. The hind leg is sickle-hocked. The heels are high. The legs are solid but fine-boned. The stallion passes on a big, toed-out walk. The trot is convincing. The canter has scope with sufficient push and balance.

The index is based on 117 upper beam scores and 127 offspring in the sport.


Sir Sinclair, bred by Monica Drohm of Doetinchem, was born in 1999. This Lord Sinclair son is out of the ster preferent sport (dres) mare Krishna, a Flemmingh daughter. After Sir Sinclair was selected for the performance test, he was auctioned in the 2002 KWPN Select Sale in which he fetched the highest bid: € 360,000. The stallion remained in the Netherlands long enough to finish 10th as a four-year-old in the Pavo Cup competition under Marieke Voorneveld. After he arrived at his new home at Iron Spring Farm in the USA, Sir Sinclair won Reserve Champion at the 2004 USEF Young Horse Dressage Championships; and the following year, he captured the Champion title in the same competition. Under Belinda Nairn, the popular breeding stallion showed in the national Prix St. Georges.

Sir Sinclair produced 89 registered offspring in the Netherlands. Of these, more than half have earned at least the ster predicate. With a score of 108 for both conformation and movement, the stallion's ability to pass on these traits is well above average. Sir Sinclair's sport breeding values are based on 117 offspring which participated in the inspections and 127 which compete in the sport.