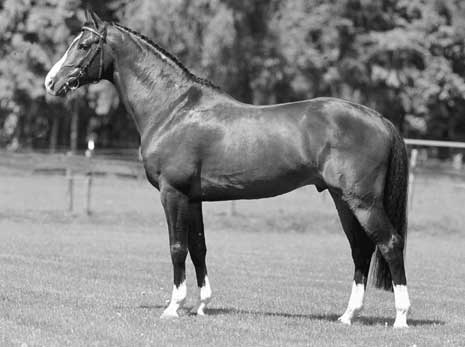 Click the name to get more info about this registered owner.

NAME
Information protected at the request of a member
H.B.C. STAL BV

Cantos is a 2.5 year old bay stallion by the Holsteiner Contender. This Calypso II son out of a daughter of G Ramiro-Z and then Ladykiller xx was the performance champion in Germany where, among other things, he rated at the top for the jumping components of the 45 participating stallions. The dam of Cantos is the NRPS mare Gabanta, who carries the keur and prestatie predicates herself. The latter predicate is not a surprise when one looks at the high scores that Gabanta got in the mare test for the jumping components. The grandmother of Cantos is the well known National Champion Abanta. This daughter of Abantos (s Abgar xx) jumped 1.40 m in Holland under Henk van de Broek and was later sold to Switzerland. A little while ago Abanta was in Holland with her Swiss owner during Indoor Friesland where the combination performed very well.

Cantos is a nicely built stallion with an expressive head. The walk is good, the trot is big and shows much suppleness. The canter is very good with much balance. During free jumping his good technique, nice bascule and powerful take-off were all noticed.

Cantos is a sufficiently developed, riding type stallion that should be a little longer and have a little more substance. The wither is very well developed. The legs are correct.

Cantos was previously approved by the NRPS. The multi talented Holsteiner sire Contender (s Calypso II) is an international concept. Here he is combined with a very interesting line in which all the mares that follow each other have jumped well. Gabanta is now jumping 1.50 m courses. Previously she made a name for herself at the EPTM in Deurne where she was a topper. Grandmother Abanta jumped internationally. In this performance selected dam line are Abantos (Abgar xx x Pericles xx) and Millerole xx guarantees for the influx of blood.

Cantos participated successfully in the stallion competition this past season. He was noticed for his gallop. He showed an excellent technique and a lot of scope with his jumps. He ended his NRPS performance with very good scores.

Cantos (s Contender) was previously approved by the NRPS. Meanwhile the versatile Holstein sire Contender has become an international concept. He is combined here with an exceptionally interesting line in which all the mares that follow each other have jumped competitively. At the moment Gabanta is jumping at 1.50 m. Previously she did very well for herself at the EPTM in Deurne where she was an absolute ace. Grandmother Abanta jumped internationally. Abantos (Abgar xx x Pericles xx) and Millerole xx are guarantors for the influx of blood in this for performance selected dam line.

This past season Cantos participated in the stallion competition with much success. The stallion was noticed for his gallop. He showed excellent technique and much scope while jumping. He finished his NRPS performance test with very good scores.

Stall and handling behavior is normal.

Veterinary report: Nothing out of the ordinary.

Offspring 2001 (foals)
The foals were mostly with plain, moderately developed mares. Cantos showed a collection of sufficient riding type, moderate to more than sufficiently developed foals that are in sufficient rectangular model and that sometimes have short legs. The head varies in shape. The neck sometimes is only moderately muscled and the transition to the wither should be smoother. The wither is generally well-developed and sufficient in length. The shoulder is good in length but should have more slope. In several cases the back is a little hollow but the muscling is sufficient. The loins vary in shape and muscling. The croup slopes and should be longer. The muscling of the croup is good. The hamstring is long. The foreleg is generally correct, but sometimes it is straight. In several cases the hindleg is sickle-hocked. The pastern is straight. The dimensions of the base are barely sufficient. The connection of the hock should be smoother and sometimes the hock should be more finished. The walk is pure and has sufficient scope and suppleness. The trot is light. There is more than sufficient posture and suppleness. There should be more freedom in the shoulder. The hindleg is actively used but should be brought underneath more. The canter should have more impulsion and scope.
Shown: 11 out of a crop of 13 foals.