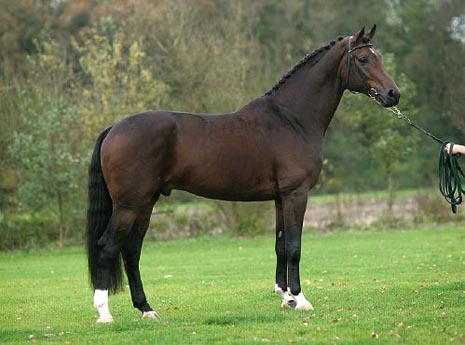 Approved by the Oldenburg Verband after an additional selection.

Approved by the Hanoverian Verband after an additional selection.

Approved by the NRPS.

Florencio is an honest and reliable stallion. He is easy on the ground and quiet in his stall.

Florencio can add scope and suspension to movement. He is best bred to large mares with good rectangular-shaped conformation and "blood."

The combination of the top Westfalian sire Florestan I and the Hanoverian foundation stallion Weltmeyer has produced this world champion, with Pik Bube II at the foundation of his dressage pedigree.

Florencio showed a collection of sufficiently developed foals with little uniformity. The foals have sufficient riding-horse type and generally more than sufficient rectangular-shaped conformation. The head is attractive. The poll has moderate length. The neck has sufficient length. The foals generally have an underneck. Several foals need more muscling in the topline. The wither is more than sufficiently developed. The shoulder has more than sufficient placement and length. The back varies in length and is dropped in several foals. The loin is well connected but tight in several foals. The croup varies in length and is often short. The line from the point of the hip to the point of the buttock should be longer. The front leg has good length but is sometimes fine-boned. The hind leg is long and sickle-hocked in several foals. The legs are sufficiently developed and of sufficient quality. The walk has more than sufficient scope but needs more elasticity. In the trot, the foals move with sufficient self-carriage. The hind leg bends well but should step farther under the body. Front leg use varies from tight to good. Several foals need better balance and more elasticity in the canter. Short summary: A collection of sufficiently developed foals with sufficient riding type. The foals often have an underneck. In motion, the foals should show more elasticity and the hind leg should step more resolutely under the body. The collection consisted of 20 foals selected by the KWPN, one of which was absent. This foal was inspected at its home location and is consistent with the findings described in this report. The foals were presented on sand footing. The quality of the dams is good. Foals shown: 19 (+1) of 196 out of mares bred in 2005. The protocol used in this report is as follows: moderate: 5; sufficient: 6; more than sufficient: 7; good: 8. Breeding recommendation, 2006: Florencio is best suited for large dressage mares with good rectangular-shaped conformation and a good hind leg.

At the 2015 KWPN Stallion Show in 's-Hertogenbosch, Florencio was awarded the keur predicate. Wim Ernes, Chairman of the Stallion Selection Committee, commented on the stallion at his award ceremony: “The Florestan I son is out of a Weltmeyer mare. He was bred by Susanne Sanal of Germany and born in 1999. As a five-year-old, he won the World Breeding Championships for Young Dressage Horses under Hans Peter Minderhoud, with an excellent average score of 9.8. The following year, the combination won the World Championship in Verden again. After that, Hans Peter Minderhoud trained the stallion through the Small Tour level. Two hundred seven Florencio offspring have been registered in the studbook, more than half of which have earned the ster predicate. Among the ster mares, a remarkably high number have also earned the keur- and elite predicate. The stallion passes on a big, correct walk and a convincing trot and canter. His sport breeding value is 146 with 92% reliability. His ability to pass on his conformation and movement is also well above average, the scores for which are 107 and 112 respectively.” Florencio offspring include Charmeur, who had three of his sons selected at this KWPN Stallion Show; and Borencio, who won the silver medal in the six-year-old division at the World Championships in Verden. Florencio was presented in-hand at his award ceremony by the Nijhof family and flanked by his son Apart (ds.Jazz), who competes in the Big Tour under Kim Schmid.