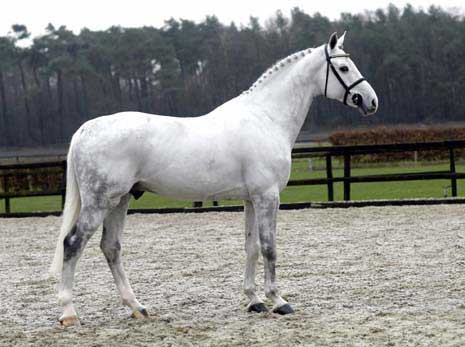 Eurocommerce Berlin is an honest, reliable stallion. During the five-day test the stallion was trained by his own trainer. The stallion"s behavior in the stall and while being handled was normal.

There were no veterinary remarks.

Berlin"s sire Cassini I jumped at the highest level in sport with Franke Sloothaak and won the Arnhem Championship amongst others. Cassini I carries the blood of the top Holstein sires Capitol I and Caletto II. Cassini I adds scope to the breeding. His sons Berlin and Cumano demonstrate this over and over again at Grand Prix level. Berlins dam Estia jumped internationally. Under the name Coba with Alois Pollmann-Schweckhorst (10th in the 1996 bundeschampionat Wardorf) and under the name Cathleen-W with Marc Wirths. This daughter of the KWPN accredited Caretino is a strong mover with good use of the hindleg. Berlin carries the blood of Cor de la Bryère on both sides of his pedigree through Caletto II and Caretino. Ostia jumped with Alois Pollmann-Schweckhorst under the name Frimella.

Interest in Eurocommerce Berlin is directed to his good performance results. This international jumper ridden by Wim Schröder has almost unlimited ability and good characteristics. Berlin was in second place for the Helsinki Championship during the 2002/2003 season as well as seventh in the World Cup competition in Berlin.

Berlin"s foals have a somewhat long, sufficiently expressive head. The poll has good length. The neck is more than sufficient in length and comes from deep in the chest. The wither is well developed. The shoulder has sufficient position and length. The back is generally hollow. The loins are well muscled and well connected. The croup has good shape but is often short with a high tail set. The hamstring should sometimes be longer. The foreleg is long but regularly with a straight pastern. The stance of the hindleg varies, frequently long and sickle hocked. The pastern of the hindleg is sometimes straight. The base is generously developed but varied in quality.

The qualities of the mares varied.

This Cassini I son out of a Carentino daughter was born in 1994 on the property of Josef Unkelbach in Cologne, Germany. In 2003, Berlin received KWPN approval based on his achievements in the sport and results of a five-day test for stable behavior. Under Gerco Schröder, the stallion performed at the Grand Prix level for numerous years. Highpoints in Berlin's career include capturing the 2006 Dutch Championship in Mierlo and helping the Dutch team win the gold medal at the 2006 World Equestrian Games in Aachen and the 2007 European Championships in Mannheim. Since then, a number of offspring from his first years at stud have become top competitors in their age groups. Furthermore, Berlin offspring are achieving their first successes in the Grand Prix: consider Zerlin's recent victory in Mechelen under Jos Lansink. Berlin's approved son Zurich, another stallion from his first year at stud, was the champion of the KWPN stallion selection. In addition, Berlin is a producer of exceptional mares. Of the mares bred to him, 64% have earned the ster predicate and more than 50% of these also qualified for the keur- and elite predicates. These percentages are remarkably high. Berlin's breeding value is 149 with 91% reliability. His ability to pass on good conformation and jumping talent is well above average, with scores of 108 and 112 respectively.