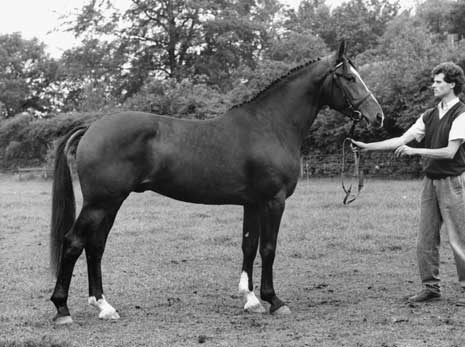 The stallion has good conformation and presence. The head is long, and the wither should be more developed. The croup has excellent muscling.

Exported to Indonesia in 1989 after the breeding season.

A friendly, obedient, and honest stallion with a good temperament. At the beginning of the test, he was green. He had difficulty rounding his topline and had a difficult mouth. To improve these issues, he was lunged, which subsequently improved the contact. The first few weeks, he was very tense, an issue which complete resolved later in the test. Over the course of the test, he developed more power. In the first half of the test, the walk was short and irregular, an issue which later improved. The trot is regular but rather short. In the first half of the test, the canter was crooked; later, it became straight, giving his rider a good feeling. The canter has sufficient regularity. The stallion jumps better under saddle than he does free-jumping. He has good form and very abundant scope. On the cross-country course, he maintains forward momentum and jumps well. His cross-country gallop is sufficient. He is sufficiently willing to work and finds his work easy. The stallion has sufficient talent for dressage, more than sufficient talent for cross-country, and abundant talent for jumping. He appeared very well fed upon arrival. During the test, he initially gained weight but lost it after his feed ration was reduced. Because he consumed large quantities of his straw bedding, his bedding was changed to shavings. He is quiet in his stall. On April 4th, swelling was observed in the stallion's head, probably due to dental problems. The same day, two milk teeth were pulled. The swelling disappeared after several days. Report concluded on June 5th.

This stallion lacked the minimum number of offspring required for inspection. Only three foals were presented: these appeared common but showed sufficient movement. Next year, more foals by the stallion should be presented for evaluation.