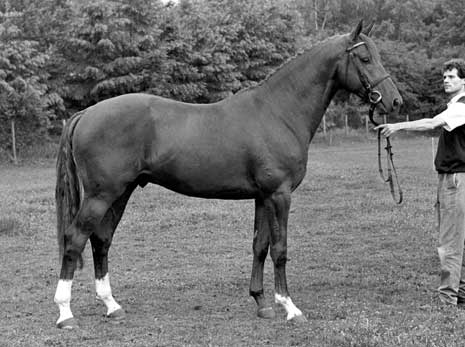 A stallion with good type and sufficient quality. The build of the hindleg should be more correct.

Performance Ermelo 1987
Balanced, eager, friendly, obedient and honest with good humor. He was still green at the start of the test. The first few weeks he was stiff through the back, this improved later on. During the second half of the test he was very fun to ride. He has much elasticity but likes to get behind the bit. The walk improved during the test and got to be regular and powerful. The trot is carried well and has much tact and regularity. The canter has moderate tact, the right lead is better than the left. He has acceptable jumping technique and sufficient scope but he is not careful. His cross-country gallop is more than sufficient and he jumps well. He is very willing to work, he likes to go and enjoys the work. He finds it easy. He has more than sufficient talent for jumping, rather much talent for cross-country and much talent for dressage. He was in good condition upon arrival but his hair coat was dry. At first he got more feed than normal and lost some weight but then filled out again.
He was calm in his stall. He was wearing a tail extension when he arrived.

Offspring 1989 (foals)
The collection of foals by this stallion were sufficiently developed and of sufficient riding type. The combination of an often long hindleg and limited length of the croup made for somewhat of a lack in harmonious lines. The head has good shape but has a tendency to be on the long side and could be more noble. The neck has good length, it is carried well but it is sometimes deep from the chest and could have more muscling through the topline. The wither is well developed and long. The shoulder has good length and placement, though the group of picked foals contained a few with a short and straight shoulder. The back is well muscled and goes into a well developed set of loins. The croup is muscled and wide but sometimes rounded and in general lacks the desired length. The foreleg generally has good stance, in a few cases it is a little fine and tied in. There are also some foals with a base that was just plain sturdy but those foals should have more quality. Some foals are base narrow. The hindleg is generally long with a rather small angle. The walk has sufficient scope and power but the use of the hindleg is sometimes stiff. The foals show much tact, scope and balance in the trot. The moment of suspension is very long. When the tempo picks up the foals keep trotting and almost none of them jump into the canter. Sometimes the shoulder should have more freedom and the hindleg does not always come underneath.

In short: sufficiently developed foals of sufficient riding type. They make good front in movement and they have scope and balance.
Shown: 24 foals out of 117 breedings.

Approval term 1996
Approved for a term of three years. Anky van Grunsven"s top dressage horse is the sire of a number of promising young dressage horses.

1997
The evaluation of his 7-year old offspring was postponed because their sport results were not available in time.

1998
Cocktail"s approval is maintained as a result of the previously postponed evaluation of the 7-year old offspring.

Keur 1998
The successful dressage stallion (Olympic) Cocktail is an exceptional ambassador for the KWPN. His results at the highest level in sport and the fact that the stallion has been able to remain at the top of international competition both contributed to the keur designation. His winnings are more than 257,967 NLG. He was the champion of competitions such as the Volvo World Cup several times. He was in 10th place on the most recent version of the BCM rankings. One may not forget that the stallion is in first place on the dressage index with 200 points and, for his age, has a large reliability of 78%. In the meantime his sons Havel, Hierarch, Jazz and Jordan have been approved for KWPN breeding.
He has a series of offspring that have made a furor both in sport and in the PAVO Cup competitions. For the PAVO Cup: Klister, Kombo-J and Expansor Kappucino. In sport: Gabber, Golfspring, Gostera, Gina, Herbert, Handel-STV, Hymne, Hope, Halewijn, Harko, Harla, Hackfort, Hippolytus, Hilextra, Hitchcock, Happy Girl, Holger, Honeur, Helianthe, Highlight, Independent, Juna, Joyride, Juno Suando, Joury, Judith, Jigger, Kanesha, and Kockster have all had remarkable performances. Looking over his keuring results one sees that besides the 29 mares that received the ster predicate there were 12 that have gotten the keur predicate. Apoint that must be made about his conformation heritability and that is that the midsection is occasionally passed on. But opposed to that - and this will not surprise anyone - stands his strong movement mechanism that he passes on in droves.