KWPN horses at the Olympics 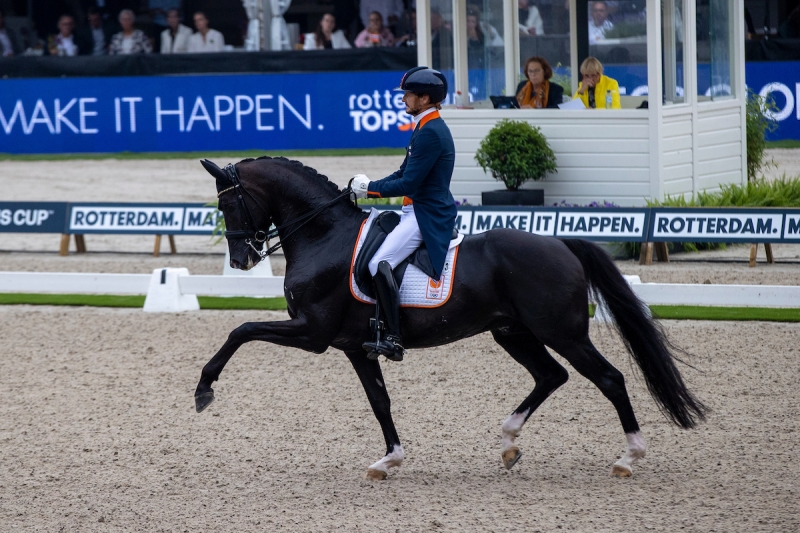 The Olympic Games will be held in Tokyo from July 23rd through August 8th. The equestrian sport is represented in the disciplines dressage, jumping and eventing. As in previous editions, a large number of the participating horses, with both Dutch and foreign riders, are KWPN registered.

In 2016 in Rio de Janeiro, both the Olympic dressage champion Valegro (Negro out of Maifleur keur by Gershwin, breeder Joop and Maartje Hanse from Burgh- Haamstede) and the Olympic showjumping champion Big Star (Quick Star out of Jolanda prestatie sport (jumping) by Nimmerdor, breeder Cees Klaver from Schoorl), were KWPN horses. Will the Dutch-bred horses be successful at the largest sports- event in the world once again this year?

KWPN stallions
KWPN stallions Totilas (Gribaldi out of Lominka elite preferent prestatie PROK by Glendale, breeders J.K. Schuil/A. Visser from Broeksterwoude) and Ampère (Rousseau out of Larivola keur preferent by Flemmingh, breeder A.T. Rensen from Hummelo) are in second place in the ranking of the best represented dressage sires at the Olympic Games in Tokyo, with three offspring.

Totilas
The Dutch team brings two sons of the phenomenal Totilas to Japan. From the first year of the Gribaldi son, Go Legend (Totilas out of Litchy elite sport (dressage) preferent prestatie PROK by Ferro, breeder Stal Wittenberg from Scherpenzeel) ridden by Marlies van Baalen, and Edward Gal takes his half-brother GLOCK's Total US (Totilas out of Sondra by Sir Donnerhall, breeder Gestüt Lewitz from Steinfeld). The third Totilas son is Te Quiero SFI (out of ISKIA VII by Loutano), who will compete with Austrian Christian Schumach. The ten-year-old stallion made his international Grand Prix debut in May this year: at the CDI4* in Ornago he scored more than 72% in the Grand Prix and more than 74% in the Spécial.

Ampère
Former KWPN champion stallion Ampère also has three offspring on the list of participants. For Morocco, Yessin Rahmouni will compete with the KWPN approved stallion All at Once (Ampère out of Wynona RB elite prestatie IBOP (dressage) sport (dressage) D-OC, breeder Stal 104 BV from Wijdewormer) to Tokyo. Victoria Max-Theurer has been selected with the Westphalian premium stallion Abegglen NRW (ds. Carabas). The Ampère trio is completed by the KWPN-bred Flambeau (Ampère out of Lakarla elite preferent prestatie sport (dressage) PROK by Zeoliet, breeder J. van Eijkelburg from Oisterwijk) ridden by the Belgian Larissa Pauluis.

Cardento
The KWPN recognized stallion Cardento (Capitol I out of B-Estelle by Lord, breeder R. Witt from Wellinghusen) has two offspring on the list of participants. Samuel Parot will travel to the Olympic Games with the designated KWPN stallion Dubai (Cardento out of Ozella keur preferent prestatie by Kastello, breeder J. van Gestel from Hilvarenbeek) for Chile. Harrie Smolders travels with Dolinn N.O.P. off to Tokyo for The Netherlands.

Most KWPN horses
The KWPN is well represented in dressage with nineteen horses in Tokyo. Sixty horses will start in the Grand Prix, so almost a third of those horses are KWPN bred. The KWPN horses are represented in jumping by 16 of the 60 participating horses. The Dutch team consists of Marc Houtzager and Sterrehof's Dante N.O.P. (Canturano out of Zidante ster IBOP (jumping) sport (dressage) D-OC by Phin Phin, breeder J.W.J. Soeter from Stokkum), Willem Greve with Zypria S N.O.P. (by Canturo) and Maikel van der Vleuten with Beauville Z (by Bustique).

Eventing
The eventing has 65 horses competing, of which seven KWPN horses. Merel Blom with The Quizmaster (Albaran out of Zarah-Maro stb by Casco, breeder R.M. Oechies from Delden) - who won silver at the World Championships for Young Eventing Horses in 2015 - and Janneke Boonzaadjer with Champ de Tailleur (Quidam de Revel out of Vera stb-ext prestatie by Oberon du Moulin, breeders G.W. ten Pas from Winterswijk and A.C. Hoogendoorn from Haaksbergen) are representing The Netherlands. Also among the participants is Allstar B (Ephebe for Ever out of Narenca B stb by Ekstein, breeder F.A.J. van der Burg from Berkel en Rodenrijs) who won team and individual gold together with his British rider Rosalind Canter during the World Equestrian Games in Tryon, USA.