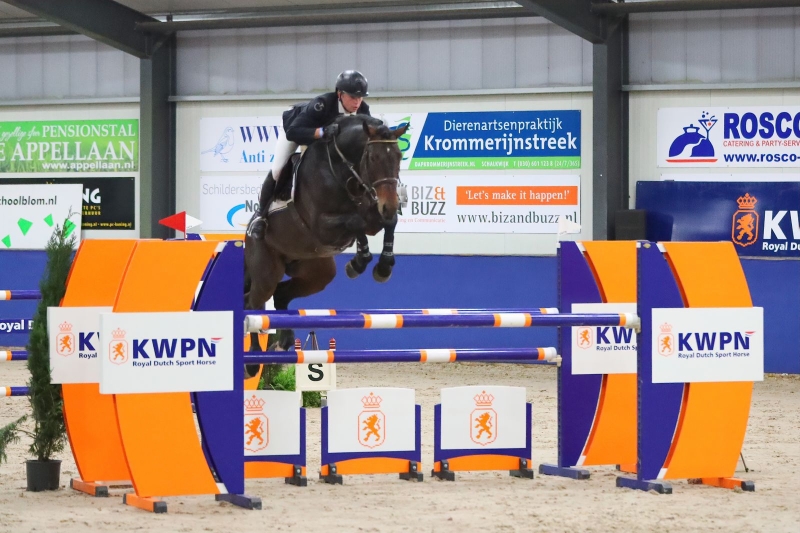 The Blom Stallion Competition started tonight with the Z/ZZ class. This time, the competition was organised at the Voornruiters. Nine out of thirteen stallions kept a clean slate in the first round and qualified for the jump-off.

The first position was obtained by Opium vd Bisschop (s.Hunters’ Scendro ZE), in a time of 32,66 seconds he outpaced everyone. Kallas (Dallas VDL out of Fadessa H2 elite IBOP-spr PROK by Quality Time, bred by A.F.W. Holkenborg of Haaksbergen) was once again the fastest KWPN-stallion with his rider Dennis van den Brink. After winning the previous leg in Peelbergen, he now placed second in a fast time of 33,78.

The by Henk Frederiks ridden Zangersheide-approved stallion Impian D (s.Bubalu VDL) secured the third prize. The champion of the 2018 KWPN Stallion Show Kannan Jr. (Cornet Obolensky out of Van Meta ster sport-spr PROK by Quick Star, bred and owned by Family Kramer of Oud-Beijerland and Sjaak vand er Lei) jumped to a solid fourth place with his rider Wolfgang Zimmermann. Hereby repeating his accomplishment during the last competition in Peelbergen. Global Touch (Global Express out of Utopia by Untouched, bred by J.P. Sinnack of Bocholt and registered to comb. Aaldering Swelheim, Loosbroek/J.P.Sinnack of Bocholt) claimed a solid seventh place in the Blom Stallion Competition. King Salvador (El Salvador out of Vivona elite pref prest PROK by Numero Uno, bred by J. Sturkenboom of Schalkwijk, registered to Ann Popovichenko of Kiev) performed a clean clear round, but incurred an unfortunate time penalty, preventing him from qualifying for the jump-off.